It was only last December that we ate at Canoe. The first time, we were treated to their regular a-la-carte menu – a combination of entrees and appetizers such as braised Alberta lamb, fresh oysters and smoked duck breast. It was a special occasion and meal for us and ever since, we’ve been comparing other restaurants to this one. 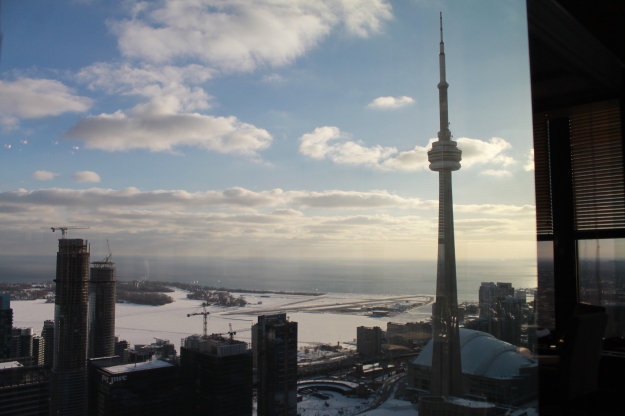 We never thought our second visit would be this soon. Fortunately, the annual Winterlicious food festival in Toronto has made lunch (and dinner) very affordable and therefore ‘easily’ convincing us to revisit one of our favourite restaurants in the city. Winterlicious (January 31-Feb 13) is really like the Olympics of eating. For two weeks, foodies alike in the city can participate in rounds of eating at the top restaurants the city has to offer. It’s not really competitive, but after a good solid meal, we really are all winners, aren’t we?

The atmosphere was calming, yet there was lively chatter amongst the business crowd and regular patrons. Canoe, one of the eight Oliver and Bonacini restaurants located in Ontario, is renown for its spectacularly breathtaking view of the CN tower and Billy Bishop Toronto City Airport. That’s really one of the selling points of this establishment that might keep you coming. Luckily, their food has been nothing but excellent quality and consistency.

The feeling of going up to the 54th floor of the TD Tower Building to the restaurant is rather exhilarating – in a good way. I often refer to it as “going up to food heaven”. (let’s hope there really is one ;)) 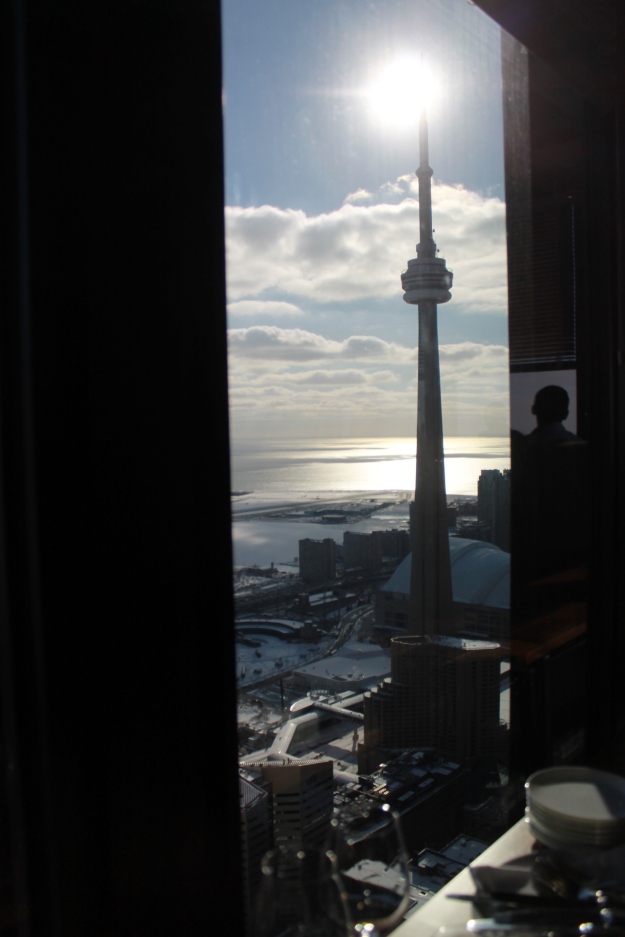 We were quite decisive this time about what we wanted to order, having perused the prix fixe menu ahead of time.

To disclose, as a big fan of butternut squash soup, I’ve been hesitant of ordering it when it’s something I could make at home or purchase in the school cafeteria. Besides the fact that it was on the cooler side, I really was pleased with Canoe’s take on a classic – infusing ginger, tarragon cream (yum), and leavened bread croutons – items I would not usually put in my homemade soup. The richness of the soup did not overpower tasting the other ingredients in the soup, which I thoroughly enjoyed. 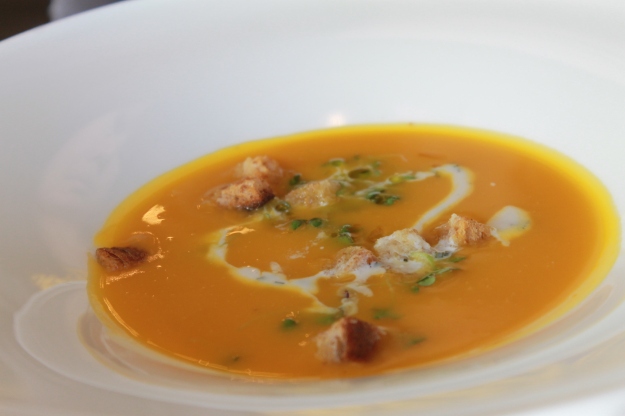 Ricelessasian, on the other hand, had the Maple Mustard Pork Rillette (similar to pâté), which was seasoned nicely and fork-tender. It was served with Kozlik’s mustard, hen’s egg, gherkin, and miniature mushrooms which all melded well with the rillette. 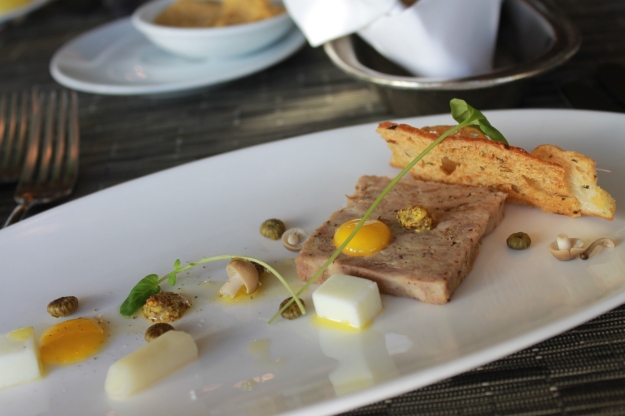 Out of the entrees, we were both drawn mostly to the Ontario Strip Loin with Northern Woods Mushrooms, Layered Potato, & Birch Onion Marmalade. Everything in that description sounded like what I would want to eat everyday. The Strip Loin was outstanding in both flavourful and texture (slightly chewy, yet tender); probably the best that I have ever tasted! The slight marbling on the meat also was what won me over about the dish. 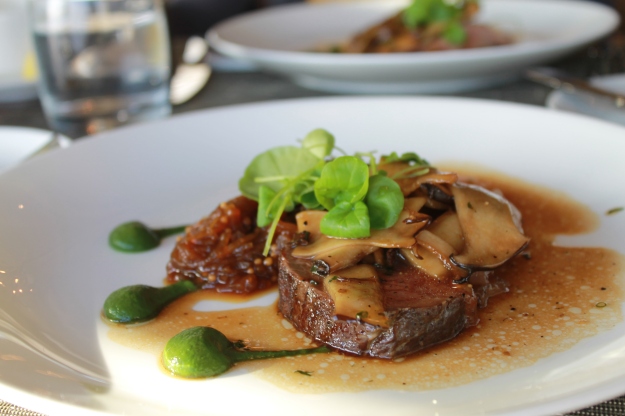 The onion marmalade was actually one of my favourite things on the plate  – it had that amazing, sweet caramelized flavour which was a lovely complement with the meaty umami flavour of the Strip Loin and sauteed mushrooms.

If you know us, you would know that we usually look at the desserts before we pick our entrees. I’m sure people with a sweet tooth are accustomed to do the same.

Ricelessasian had the Wild Rice Pudding (ironically). The texture of the rice pudding was nice and chewy. The incorporation of the wild rice was a nice touch to the conventional rice pudding. We really enjoy the the mousse which topped the rice pudding. It was light, earthy, and fruity. 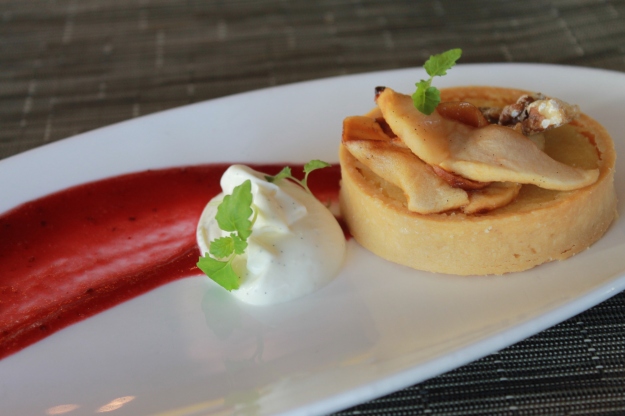 The Niagara Walnut Tart (apple caramel, roasted apple and creme fraiche) was a very decadent way to end the meal. It had a lovely buttery taste and the pastry was crisp rather than flaky. Believe me, it is a richer dessert but so worth it if you’re a fan of apple pie, or tarts in general. The mixture of tanginess from the berry sauce with the sweetness of the roasted apples on top complemented each other well. It was a very generous portion for a dessert to the point where I ALMOST couldn’t finish it! Thank you Canoe for not be stingy with the portion sizes.

Having one of the last lunch reservations of the day, we had the restaurant almost to ourselves near the end of our three-course meal. We thought it was a great moment to capture the view on the other side, something that we didn’t do the last time around.

If you’re ever in the city, we highly recommend to be wined and dined at Canoe. 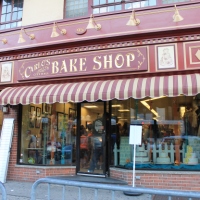